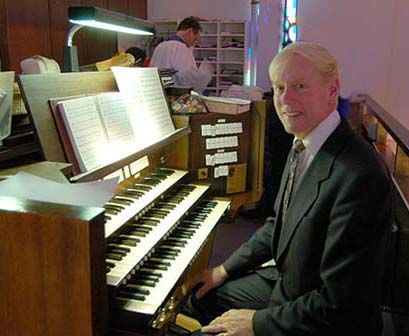 Come hear organist Sean O'Neal and our very own Greg Schreiner present music from the 1700's to the present, including solo pieces by each organist, a few organ duets, and some including accompanied by the St. A's Chamber Singers.

The concert will begin at 12:30-pm on Sunday Nov. 13, preceded by a light lunch served at 12 noon in the courtyard. All are welcome!

Sean Coburn O'Neal is the Director of Music at St. Cross Episcopal Church in Hermosa Beach, after having been Director of Music & Organist/Choirmaster at Holy Trinity Episcopal Church in Covina, CA. Sean has received musical honors and awards from various musical organizations, most notably having been awarded the first-place performance prize in two regional American Guild of Organists competitions: Arizona, 1995 and Hawaii, 1997.

Greg Schreiner has been organist and pianist at St. A’s since 1989. As a pianist, Greg has performed as soloist with the Los Angeles Concert Orchestra, Santa Monica College Symphony, UCLA Symphony Orchestra, Cypress Orchestra and performed at the opening ceremonies of the 1984 Olympics. He is been on the piano faculty at Santa Monica College since 1986 and at Cerritos College since 1989. Greg performs extensively around Southern California. He is also accompanist for the Mansfield Chamber Singers of Beverly Hills. He performed the Shostakovitch 2nd Piano Concerto for the PBS series In Search of Wisdom and gave two recitals at the Richard Nixon Library in Yorba Linda, California as well as six recitals at the Bellflower Civic Auditorium.

St. A's is joining the greater Episcopal Church in reading the Books of Ruth and Esther during the season of Epiphany. Rev. Nate is leading discussions as we progress through reading Ruth in January then Esther in February. The reading schedule is in the weekly email and on our website. All are welcome – whether you’ve done the week’s reading or not. Meet in the Sts. Francis & Clare Room, on the second floor of the office building.